Well, I survived a hectic last month of essay marking, administrivia, last-minute Xmas shopping and even a much-procrastinated and extended feature-article deadline. Finally, I have a wee smidge of free time to catch up on my pleasure reading of books, magazines and newspapers. (And a little blogging.)
I realize you'd have to be a complete magaholic to want a read about the business history of Reader's Digest Magazine — that hoary old standby on grandparents' bathroom magazine racks everywhere — but I found the feature in last week's Sunday New York Times about the magazine's rise and fall (and attempted rise again) fascinating reading: how the magazine became a surprising success that made more money than its founders could give away and then turned into yet another debt-burdened, bankrupt victim of short-sighted corporate profit-first ambitions.
It's hard to imagine how Reader's Digest might survive long enough to experience a renaissance in the digital age. (Hiring Derek Webster, the brilliant founder of Maisonneuve Magazine, is a good first start for the Canadian edition.) Still, I've got a soft spot for a publication that is too often a punching bag and a punch line for urban hipsters in the periodical biz: I can certainly credit early reading of the "Drama in Real Life" (recent hed and dek: "The Trapper’s Trial: This first-hand look at one survival expert’s near-death ordeal will chill you to the bone") and "Laughter is the Best Medicine" sections from my parents' subscription for my interest in misadventure stories and humour writing (of the bad pun variety) respectively.
Speaking of Digests, another one that ran afoul of the inevitable production "dead zone" between wrapping up a magazine's editorial and its printed version actually hitting newsstands was Golf Digest. The January 2010 issue includes a cover photo of Tiger Woods and President Obama and the coverline "10 Tips Obama Can Take From Tiger"—all to promote a feature article that was "put to bed" (as they say in the biz) before what Tiger has been doing in his various extramarital beds hit the tabloids in December.
Oops. I hate golf, but I'm dying to know what advice Tiger for has Obama these days! 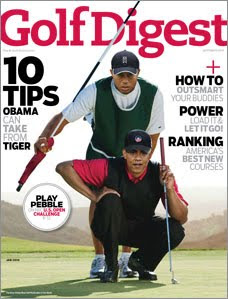 Excellent site, keep up the good work. I read a lot of blogs on a daily basis and for the most part, people lack substance but, I just wanted to make a quick comment to say I’m glad I found your blog. Thanks
==============
KPO Projects Available