Making Art out of Tragedy (and Tragedy out of Art) 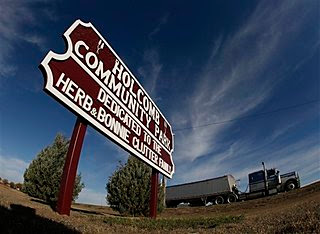 Last weekend marked the 50th anniversary of the brutal, senseless murder of the four members of the Clutter family in Holcolmb, Kansas. That terrible event might have been long forgotten by now, if novelist and short-story writer Truman Capote hadn't read a news story about the killings in the New York Times. The brutality and mystery of the murders piqued his literary interest—he had been searching for a true-life subject with which to test his ideas about writing a "nonfiction novel"—and he embarked on what would turn out to be five years of research, interviews and even a controversial correspondence with the two men who were eventually tried, convicted and executed for the crimes.
The result of his efforts, of course, was In Cold Blood. Even before it was serialized in The New Yorker, the project had generated enormous buzz, and in book form, it became an instant bestseller. It launched a whole sub-genre of true-crime books—few of which have even come close to the exacting literary standard that Capote set. (The opening chapter remains one of the most haunting in all of literature.) 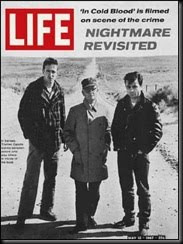 The book
was made into a movie in 1967—one that used many of the real-life settings (and even people) to evoke a sense of authenticity and that starred Robert Blake, an actor who would gain his own infamy decades later. More recently, two immensely watchable bio pics (Capote and Infamous) offered perspectives on the making of the book and the unmaking of its author.
His long immersion in the sordid, tragic lives of his characters ultimately exacted a great emotional toll on Capote. He never wrote anything close to the quality of In Cold Blood, either in fiction or nonfiction, and descended into a boozy parody of himself on the talk show and party circuit. But 50 years after the tragedy, his book remains one of the classics of North American nonfiction writing—much admired, rarely emulated, a testament to its author's obsessive commitment to transforming the raw, bloody matter of real-life into high literature.
Posted by David L. at 10:20 AM

Many institutions limit access to their online information. Making this information available will be an asset to all.
Writing a Research Paper

I wish I was a boozy parody of myself.

Give it a few years, add a few elbow patches to your suit jackets, and then complain about your gout in class...

This conversation is going no where. It’s lacking the place of a good leader to head the things to come out on conclusion.
===============
OUTSOURCE Projects Available